Support House Bill (HB) 578 that dedicates funds for Louisiana (LA) 415 / LA 1 connector. It can be the solution to tIntracoastal Waterway Bridge safety, evacuation and bottleneck issues. 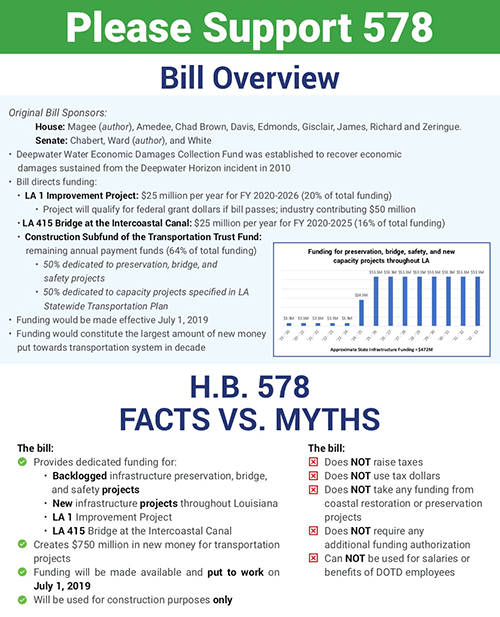 House Bill 578 would dedicate economic development proceeds from the Deepwater Horizon Economic Damages Collection Fund to the planning and construction of the LA 415 Bridge, as well as for other infrastructure projects. The West Baton Rouge Chamber of Commerce recognizes the dire need to secure this critical funding for the long-planned LA 415 / LA 1 connector, which would bypass the congested LA 1 and provide another access point to Interstate 10 and the Mississippi River Bridge; and, the second phase of improvements to LA 1 between Golden Meadow and Leesville. Representative Tanner Magee, who represents District 53, and Senator Rick Ward, III, R-Port Allen, co-authored the bill to provide the means necessary for the near "shovel-ready” infrastructure project because of work by the Parish, which has provided for the LA 415 corridor study, and more recently the topography survey. The connector will provide an I-10 diversion to detour traffic across the river via the U.S. 190 Bridge during peak traffic times and in the event of an incident on the Horace Wilkinson Bridge.

LA Highway 1 is a principal artery of the national transportation system with an intermodal link to the nation’s energy supply, and oil and gas industries. It connects to Interstate 10 in West Baton Rouge, crossing the Intracoastal Bridge and is the only unrestricted access for LA Highway 1 in the region.

More than 44,700 vehicles travel over the Intracoastal Bridge daily – far exceeding its design capacity. The bridge has an F rating and is more than 50 years old. The LA 1 route, which is also exceeding its design capacity, is also a hurricane evacuation route for some 120,000 people in south Louisiana. The I-10/ LA Highway 1 Connector is the solution to this critical traffic bottleneck.

Why an Alternative Route Is Critical 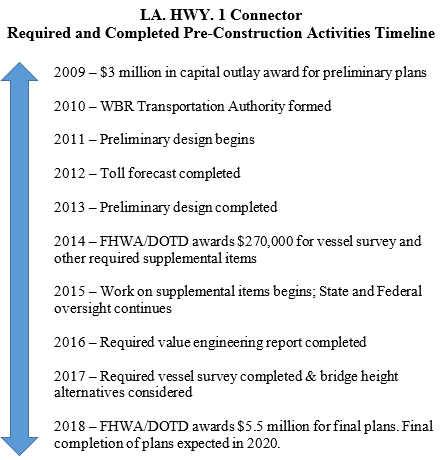 The population of West Baton Rouge is only 24,000, yet 44,700 vehicles travel on LA Highway 1 and over the Intracoastal Bridge daily. This shows the LA 1 roadway is a major transportation route for this region and south Louisiana.

Recently announced and expected projects at Westbank chemical plants total $2.7 to $3 billion, and will bring hundreds of jobs. This will further stress this already congested roadway. Approximately 35,000 trucks travel to and from the Dow Chemical Company site straddling West Baton Rouge and Iberville Parishes on LA Highway 1 annually.

Economic development and residential development of the area are stifled because of the traffic issues at the Intracoastal Waterway Bridge. Peak hour congestion, accidents and maintenance projects in the area of the Intracoastal Waterway Bridge regularly create severe disruption to LA Highway 1 traffic flow. This cripples business efficiency in numerous ways.

In the last 50 years, the Baton Rouge area has more than doubled in population, and seen more than twice the growth of other Louisiana metropolitan areas. Long-term projections anticipate an additional 217,799 residents will live in the area by 2035, according to the CDM Smith Comprehensive Traffic and Toll Revenue Study commissioned by West Baton Rouge Parish.

The Baton Rouge region is poised for relatively strong economic growth and robust employment growth in the future due to the presence of large-scale, relatively stable industries, emerging industries and advantageous transportation corridors. A projected 383,474 jobs are predicted by 2035, according to the CDM Smith Comprehensive Traffic and Toll Revenue Study.

The present Intracoastal Waterway Bridge is more than 50 years old and has exceeded its design capacity, with 44,700 vehicles traveling over it daily. Its present level of service is rated F, meaning it is well over capacity. By comparison, the I-10 interchange at Breaux Bridge has 41,054 vehicles per day and the I-10/US 61 (Airline Highway) route at Sorrento has only 36,324 vehicles traveling it daily.

The only other route back to LA Highway 1 if the bridge is closed is a 53-mile journey on a winding 2-lane highway, and with traffic it becomes a 2-3 hour ordeal. The proximity of the Intracoastal Bridge to the I-10 bridge is so close that when the Intracoastal Bridge is backed up with traffic, which happens daily, the traffic backs up on the I-10 bridge. 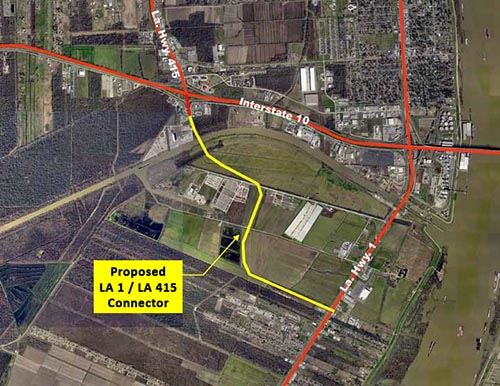 The LA Highway 1 route over the Intracoastal Waterway Bridge is the hurricane evacuation route for some 120,000 people in seven parishes. It is estimated that evacuation would take 24 to 36 hours on this route!

The Connector Project is endorsed by: