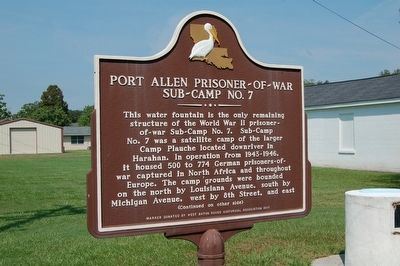 This fountain is the only remaining structure of the World War II prisoner-of-war Sub-Camp No. 7. Sub-Camp No. 7 was a satellite camp of the larger Camp Plauche located downriver in Harahan. In operation from 1943-1946, it housed 500 to 774 German prisoners-of-war captured in North Africa and throughout Europe. The camp grounds were bounded on the north by Louisiana Avenue, south by Michigan Avenue, west by 8th Street and east by 6th Street. The camp consisted of tents with wooden floors, each housing several prisoners. There were separate buildings for the kitchen, mess hall, and showers. Due to wartime labor shortages on the home front, prisoners were used on local sugar plantations, Cinclare, Poplar Grove, Westover, Smithfield, Devall and Alma. Ranging in age from 19 to 52, the prisoners were paid 80 cents a day for an 8 to 10 hour workday, six days a week.